I did a day trip down to Columbus, Ohio to attend Origins on Saturday. It’s only a 2-hour drive, and with masks and vaccines required, it was still a risk, but a calculated and acceptable one. Let’s talk about games I got, games I saw, and plans going forward.

To make things clear now, if you disagree with any of the following, you’ll probably not want to read the rest of this post:

I had planned to basically go through the exhibitor hall, checking in with folks I hadn’t seen since pre-pandemic times. Reminding them that I still exist, talking about demos, reviews, the state of the industry, new stuff that’s coming out, etc. I also wanted to see friends that I haven’t seen since pre-pandemic times as well. I’d get some review copies, make some purchases, and drive back home.

In terms of seeing friends, it was really great to see folks. We got to catch up, talk about the baby, and what games have been good lately. It’s something I have very much missed because while I’m an introvert, I have good friends who I basically only see at conventions. It’s normally spread out over a few days, but even the quick fist bumps and passing conversations were great to have.

In terms of games, I had gone through the Origins Preview that BoardGameGeek does and found the titles that caught my attention. That being said, I also knew that I’ve been out of the loop for a bit with convention news between becoming a father and the pandemic, so I took time at each company’s booth to check out the games they had.

The booths were decently spaced out and despite going on Saturday, traditionally the busiest day, the aisles weren’t too crowded. There were still plenty of people, but I never felt overwhelmed. The Origins app wasn’t 100%, but it worked better than previous attempts and was useful.

I loved the giant games that I saw. Giant Galaxy Trucker was just crazy with tiles that were a foot square and huge 3D printed aliens and astronaut pieces. 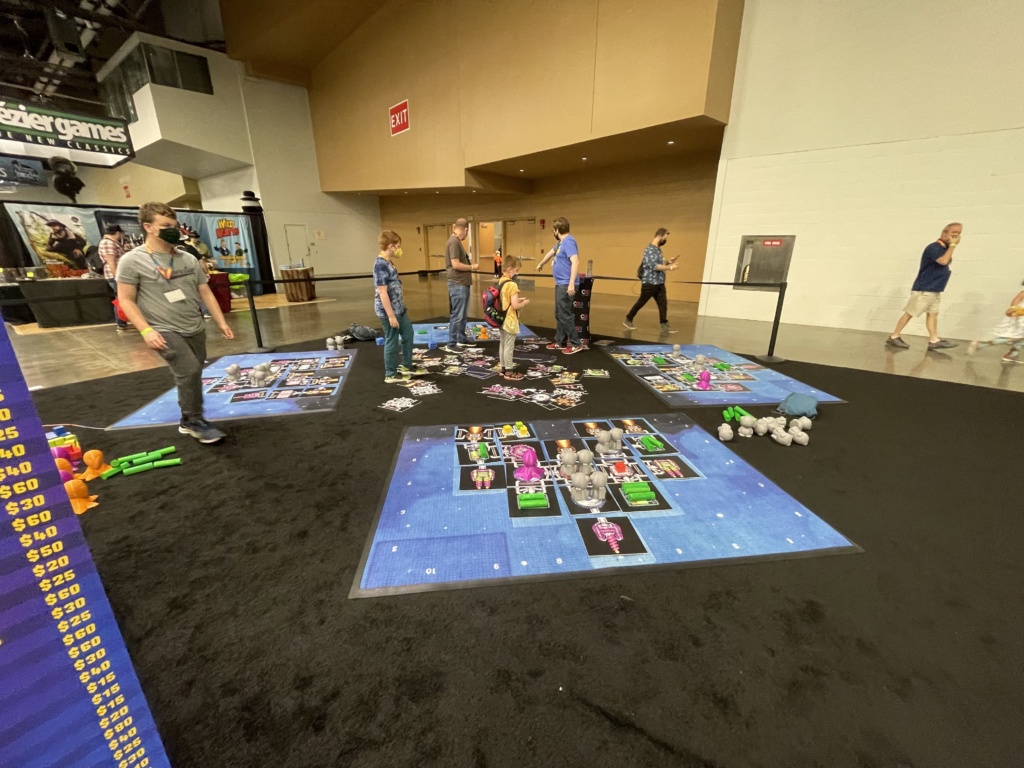 Giant Kabuto Sumo was so pretty to look at and didn’t suffer from sizing issues changing things. If you’re familiar with Oink games, this is how big SCOUT was sitting on it. 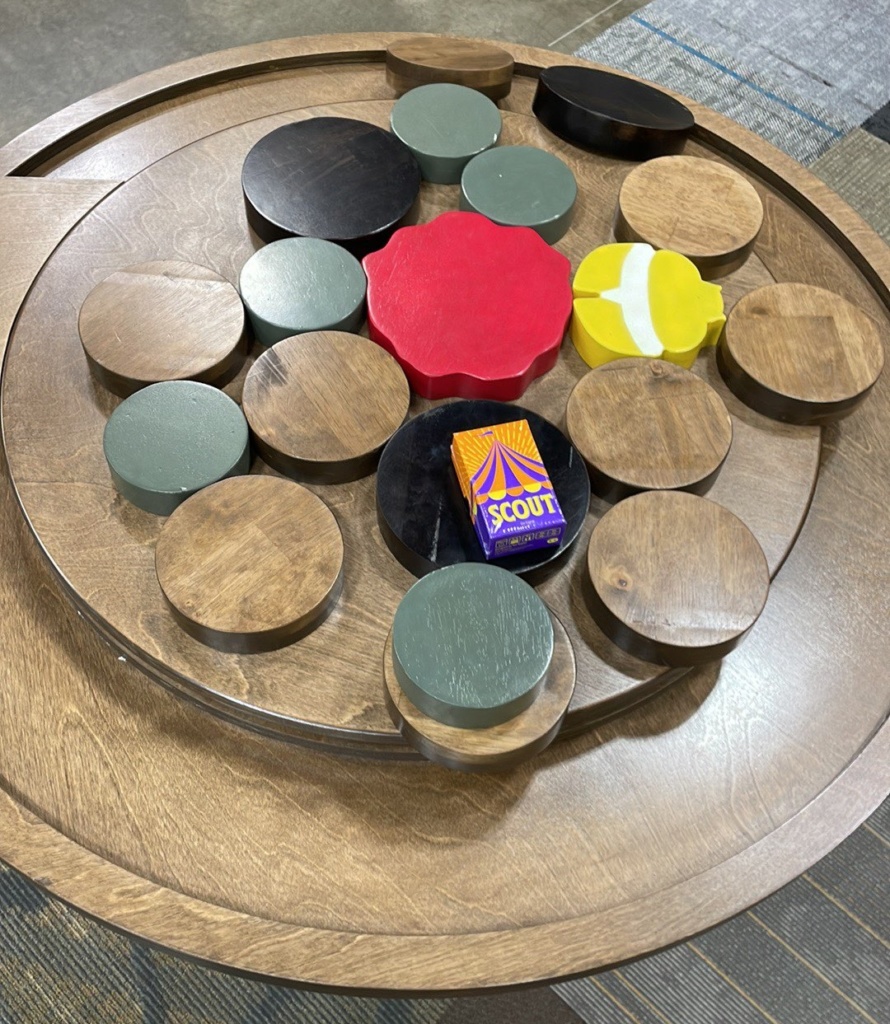 I didn’t play anything while at the show, instead focusing on quick stops with each publisher. I knew going in I wanted to check out some games but it was also nice to just browse. Maple Valley is an upcoming hand management and set collection game from KTBG in the Creature Comforts universe. It’s not out yet but will be on a crowdfunding site this fall. Seeing Foundations of Rome in person at the Arcane Wonders booth was just awesome. The box is huge, the pieces are very well done, and the game looks so nice. I’m excited to try Akropolis if Hachette / Gigamic sends me a copy. The tiles are super chunky and the gameplay looks solid. I know Tenpenny Parks isn’t new at the show, but it looks like a solid game that does polyominoes and worker placement well together. Unfortunately, when I went to get a copy, they were all out at the Thunderworks Games booth.

That all being said, I also had a few surprises. Cryptid Cafe looks like a perfect game for Sam and me ⁠— serving cryptids weird meals and trying to make sure they don’t walk out. I had it marked as something to see, but I picked up the deluxe edition from the first-time publisher Squatchy Games. I didn’t realize there was a 25th Anniversary edition of Bohnanza, but the copy I have is still in good condition, so I didn’t go after the new version from Amigo.

While the energy wasn’t quite what I am used to at Origins, there was still a lot of passion and enthusiasm for games. BoardGameGeek didn’t have a booth at the show, and several big names were absent as well. AEG, Eagle Gryphon, and Wizkids all come to mind. CoolStuffInc. was there, but I don’t think they were selling any board games and were focused on CCGs. There were lots of folks showing off demos and some really solid deals to be had. For example, Capstone Games had everything for Clinic, which includes the base game and seven expansions, for only $200. It wasn’t a normal Origins, but it was the closest that they could get given the circumstances.

All attendees, exhibitors, gamemasters, event organizers, volunteers and event staff will HAVE TO wear a mask while indoors unless actively eating or drinking in designated areas.

A lovely idea, but this was not enforced in the slightest. When I arrived and got in line to show my proof of vaccination (also required), the person in front of me didn’t have a mask on. We went by several volunteers who didn’t say anything until I mentioned it. Apparently, this person didn’t have a mask to wear. I saw many, many dick noses (explanation below if you aren’t familiar with the term). I also saw plenty of people with masks under their chins or without masks entirely. When I asked one person to put a mask on, he said he didn’t realize that masks were required. When another was asked, he requested that everyone “suck his ass” as he stormed off. 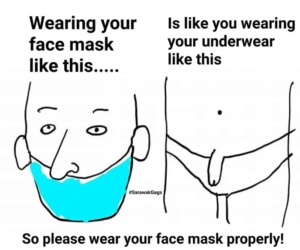 I spoke with a volunteer about the lack of masks on vendors in some booths, and she called it in. I later spoke with the same volunteer and got to speak with the head security person, who went and asked them to put their masks on. They did until the security person left, then they were back off. So if you want to support companies like Crystal Caste, feel free, but I won’t be buying anything from them again. I saw one employee blow his nose, toss the tissue, and then just carry on. No sanitizer, no mask, no respect. 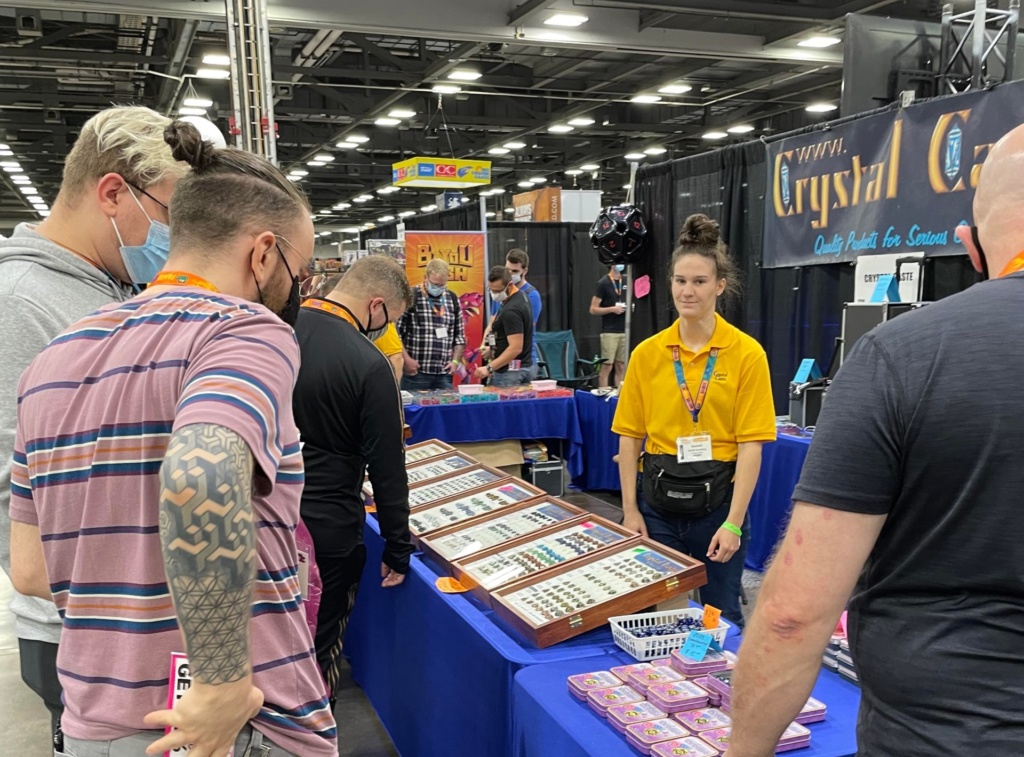 To those who say “The vaccine and masks don’t stop 100% of COVID” ⁠— you’re right, but they help prevent and can lessen effects if you do catch it.

I recognize that I’m more sensitive than the average person when it comes to the pandemic. My partner is immunocompromised. My daughter can’t get the vaccine. If either of them get COVID, it could kill them. I went to Origins under the impression that “Masks required” meant just that.

To the folks who attended and flagrantly removed your masks or didn’t wear them much at all, your self-centered attitude is awful and you should be ashamed.

To the folks who removed their masks for photos, please understand that to someone like me who has to deal with a larger risk, you’re giving your photo op a higher priority than the safety of anyone who is at risk or knows someone who is at risk.

To the folks who don’t see what the big deal is, I don’t know how to help you see that a million Americans dead isn’t worth your freedom to not wear a mask.

To GAMA and all those who were supposed to be responsible for mask enforcement, I hope you reconsider in the future and do better. This was a clusterfuck and there’s no other word for it. You chose to require masks to help keep people safe, “based on concerns from GAMA members, exhibitors, GMs and attendees, as well as an upward trend in the pandemic, it reinstated the mask requirement,” but when it came time to actually enforce your decision, you did nothing. Your social media was filled with photos of people without masks on. Your post about thanking your volunteers has most of them without masks. This is ignorance, stupidity, and pure disrespect for the very people you said you were trying to protect. 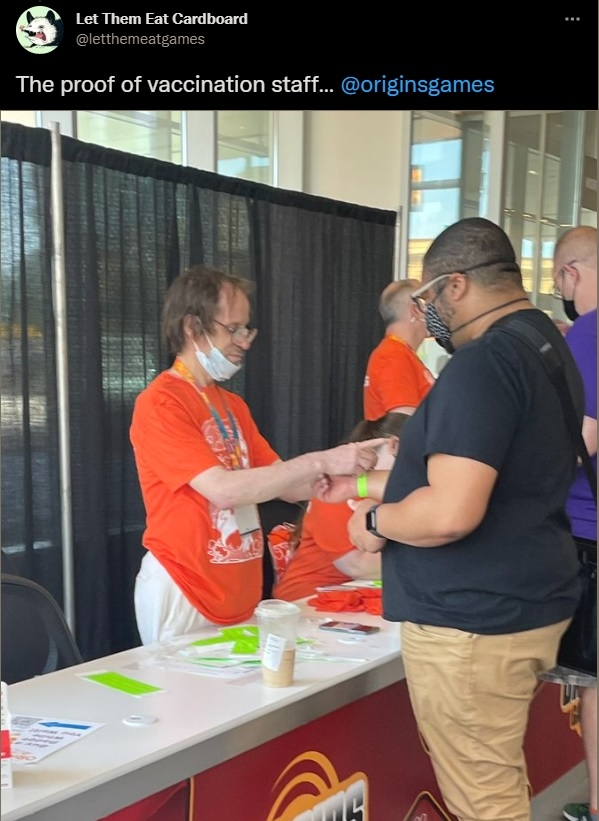 If you were at Origins and you saw the mask rules not being enforced, please let them know. If you didn’t go to Origins because of concerns, please let them know so they understand how much this can impact them. GAMA clearly doesn’t care about the people, just the money, so let’s make them pay attention. If you went to Origins and now have tested positive for COVID, please make sure they know.

When I planned to go to Origins, I made a calculated risk. The benefits of seeing my friends and supporting the hobby outweighed the concerns of the pandemic. When I arrived, it was clear that GAMA and many attendees don’t care about other people or the rules. Trusting GAMA is not a mistake I plan on making again.