I spent June 15th through 19th in Columbus, OH for my ninth Origins Game Fair. I love Origins, and this year felt busier than ever. While there were only 15,480 attendees, it felt like there were more people there over the course of the convention. But enough about the people, let’s talk about the games at Origins 2016!

Origins this year had 52,561 turnstile attendees, up almost 9,000 from 2015. What this meant is that each person who came to the show came for more days, meaning there were more people there for every day of the convention.

I got to play 13 games at the show and I enjoyed every one of them. It was a good show for gaming, with lots of friends to play with behind Pikachu’s Butt, a landmark we used for the tables we played at for most of Origins 2016.

The first purchase of the convention was Guilds of London, a very popular game from Tasty Minstrel Games that only had 100 copies at the show. The game has players trying to control various Guilds of London (shock, I know). The game play is driven by cards that allow you to recruit a member, move a member, or use other cards to pay for an ability. There is a lot of iconography on these cards, so it seems intimidating at first. I got it to the table at the convention only once, and while there is a lot of information up front, I enjoyed the game and can’t wait to see how more plays changes the strategy.

Thursday was a day to see the show floor more than to make purchases. I tried ManaSurge from Daily Magic Games and enjoyed the escalation and hand management in the game. The art helped to enforce the theme of the players casting magic spells and increasing the strength of it while trying to not get hit by it. I have now played ManaSurge four times since getting it at the show and have enjoyed every play. I haven’t tried switching out the suits or using the character cards, which I’m sure will add even more to the game.

After that, I stopped by the Passport Game Studios booth to check out two pre-release games they had there. 3 Wishes is a very light filler game that only takes a few minutes. Each player is a child trying to get a set of a super power, a benefit for the world, and a selfish wish. Players can’t freely look at their hands so players have to remember where the cards they know are moving to. It’s a cute game that I enjoyed and brought home a prototype version of to play more. I also had Quartz explained to me, though we didn’t play as there were only two of us at the time and the game is a three player minimum. Players are dwarves mining and trying to get anything but obsidian. Get two of those and you bust in this push your luck game. Players can also play cards that let them get advantages or mess with other players. I like the idea and can’t wait to give the game a full playthrough.

3 Wishes is an adorable card collection game where you can't see the cards at all times. #Boardgames #BGG #Origins2… pic.twitter.com/4RBLLiwFJ9

I went around more of the exhibitor hall, seeing what new companies were around. I visited the Devir booth, I believe their first time at Origins, and saw Holmes: Sherlock & Mycroft. This game for two players uses worker placement and set collection to pit the Holmes brothers against each other. The game feels very well done and while I’ve only played once, I’ve thought about it a good bit. The character art is well done, the different abilities of the other characters in the game are interesting, and the game feels very polished. If two player games are something you’re after, give Holmes a look over.

I then stopped by the Calliope booth and tried Menu Masters, one of the games in their Titan series. It has players trying to gather ingredients to complete menus. However, money is a very limited resource, so players can run the stores instead of buying ingredients and get the money that the players spend on the ingredients. This creates an ebb and flow to the income in the game that keeps players active and interested. It’s still a lighter game, but I really enjoyed playing it.

The last game of Thursday was Heroes of Land, Air & Sea. This is a game still being worked on by Scott Almes and Gamelyn Games, both known for the Tiny Epic series. The game is far from tiny, with the final board planned as 39 by 26 inches. It’s a full 4X game, with many strategic options and conflict between the players. While the game needs a few tweaks on some of the abilities, each race feels unique and special while still feeling balanced. I can’t wait to see what Michael and Scott do with the game to make it shine.

Friday was another busy day. It was spent spending more time with each publisher, talking about their plans for the upcoming year and their recent releases.

The Malted Meeple, a local board game café, was at the show and they had several local designers show off their games. Kung Fu Zoo is a game where the animals at the zoo wrestle after the people have left. The game has players flicking dice on a rotating board, trying to get their opponent’s dice to fall into holes in the corners on the board. It’s a very simple game where each animal type gets a special ability. I enjoyed the game and want to play it more. Unfortunately, in the hustle of the convention, I didn’t grab a photo. I’ll be posting photos once I get to play it again.

Hero Realms was the next game played, the next game being released by White Wizard Games, creators of Star Realms and Epic. Hero Realms feels like Star Realms, but not the same. The base game works like Star Realms, but the options of different characters and campaign play separate it from the simpler Star Realms. I enjoyed playing it, and defeating Rob Dougherty, CEO of White Wizard, certainly didn’t hinder my enjoyment. I want to see the full game, but I have faith that the final product will be as fun as expected. It’s up on Kickstarter now. 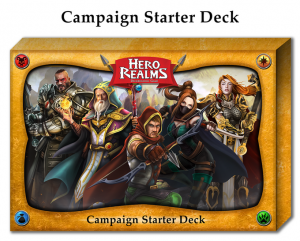 After spending time in the dealer hall, we met under Pikachu’s Butt and played Archaeology: The New Expedition. This set collection game with buying and selling is a reprint by Z-Man Games. I enjoyed the way that the game flow works and the risks of having many cards in hand. The different monuments, such as the Great Pyramids or the Sphinx, make each play unique. The set up of the game feels a little funny the first few times, but it’s an interesting card game that I think will hit the table often in the coming months.

The last game of Friday was Sushi Go Party. Not a game that I got at the convention, but one that I thought would be a fun game to take and let people play. Gamewright sent me a review copy for the new release, and it was a popular item. Lots of people stopped by the table where we were sitting to check the game out. If you’ve played Sushi Go, Sushi Go Party adds more cards and changes the way the game plays slightly. It has the deck being reshuffled after every round, meaning that the rare cards are more frequently playable. I enjoy the rules change as well as the new cards and I can’t wait to demo it at my FLGS.

Saturday was another day of talking with publishers and friends. The lines at Origins were busy as ever.

When I first saw Barnyard Roundup, I was concerned it might be aimed at too young of an audience for the game to be fun for me. However, I am happy to say that the game is a well executed and simple bluffing game. Players are trying to get animals into their pens, but the collection of the cards is tied to being able to out-bluff the other players. It’s goofy, fun, and the creator even has a way for players who can’t bluff (like me) to play well: Instead of declaring the animal type, the players make the animals noise. This simple addition makes the game feel goofy, but I really love how it works. I can’t wait to see what James at Druid City Games does with his Kickstarter.

One of the last games of the convention was Rocky Road a la Mode, a game about driving an ice cream truck by Green Couch Games. The game is a light engine builder where players are trying to deliver ice cream and get victory points. It’s on Kickstarter now and I enjoyed it enough to back it. I also got a preview copy that I’m hoping to play more soon.

The convention was awesome, but there were still issues with it. The were technical issues with the show, where the registration computers had to be rebooted. The convention center was under construction in many locations, which was a bit of a hindrance, but wasn’t GAMA’s fault. The convention is working on getting things together, and while there were issues, I wouldn’t miss Origins 2017. It’s a great convention to go and play games and while I know that the show has its issues, it was my first convention and is one of my favorites.