Van Ryder games has made some unique games before, and now they’re working on getting Saloon Tycoon published. Is this game just a bunch of snake oil or is it worth staking a claim over? 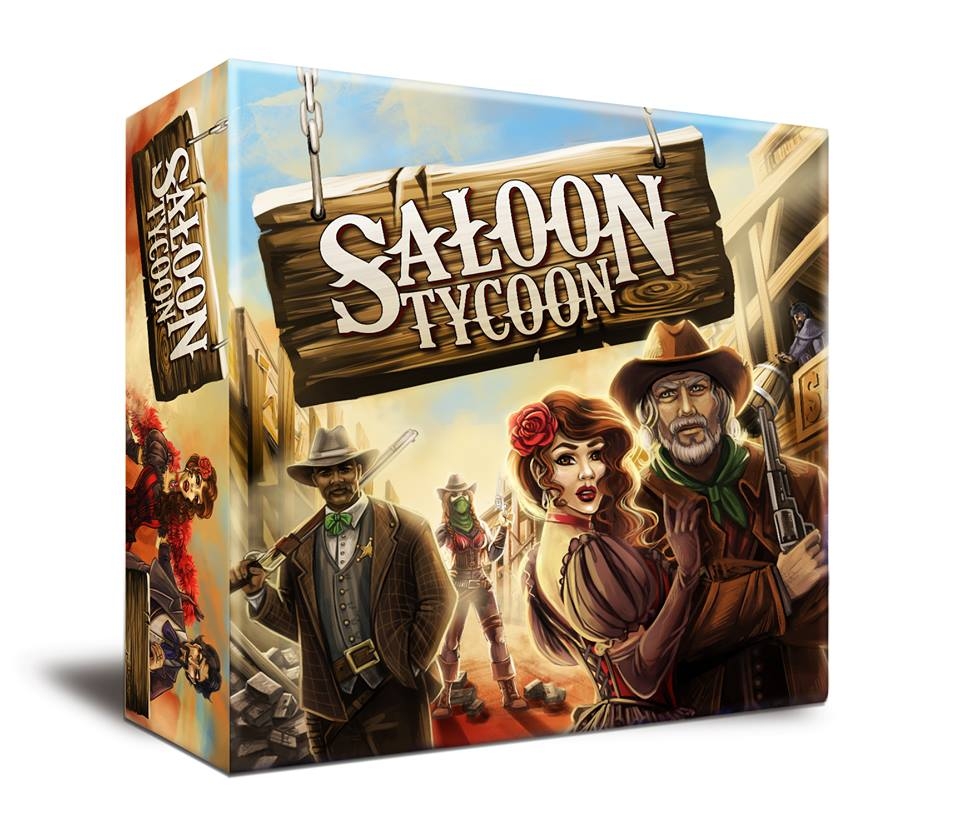 Saloon Tycoon is a game where players manage their gold, cards, and plans to best score points against the other players who are trying to do the same. Players will use their turns and resources building up their own cities in full 3D. Players will buy different rooms, adding them to their town. Those rooms are worth points when all the spaces get filled up and they give the owner a one time bonus in the form of gold, actions, or cards. As the player adds more rooms to their board, it really starts to feel like a western town.

There are a number of characters in the game who may visit your town. Some of them are law-abiding Citizens who are worth points at the end of the game. Other are problematic Outlaws and cost the player money, cards, or points. These characters are in every game, but obtained through specific methods.

While players are building up their towns and inviting in all kinds of characters, there are also plans to be hatched. There are two kinds of these cards: Open Claims and Secret Claims. Each player starts with four Secret Claim cards and keeps two. These can help steer a player’s decisions during the game. If a player has the Too Many Suitors card, they’ll get two points for each Male character as long as they have the Widow Campbell. The Nefarious Plans card gives the player four points per Outlaw they have at the end of the game. These cards are kept hidden and with 32 different cards, even experienced players won’t know exactly what their opponents are up to.

Open Claims are face up in the middle of the table and can also influence what players are after. These are like the Secret Claims cards, but are available for any player to claim during the course of the game. The card An Unlikely Love Connection is worth four points to whoever gets a male and a female character at the same time first.

Finally, there are Tycoon cards, which grant a special ability when played. Playing The Prospector is worth six gold, while The Stagecoach grants two actions, making that turn twice as productive. These cards come in handy, but there’s a variety of them and they don’t always give you what you’re after. There are also cards like Frontier Justice and The Outlaw, which allow you to take three gold  and steal one of two Tycoon cards from an opponent, so no plans are completely set it stone. 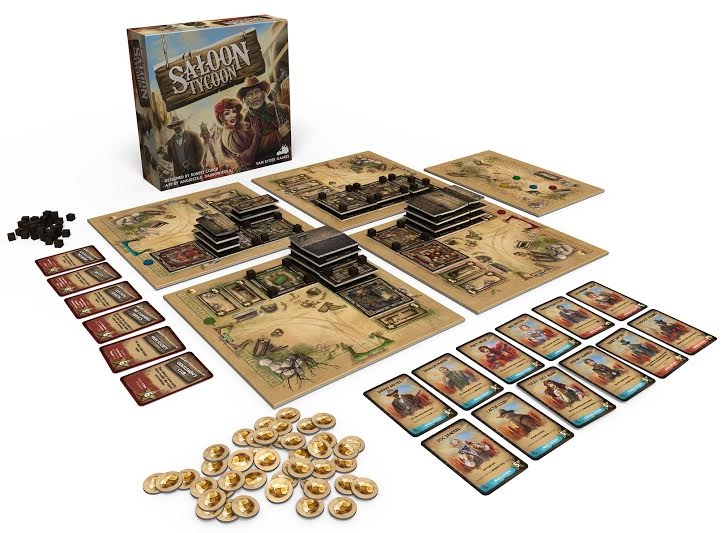 During each turn, a player will collect income equal to the number of tiles they have, then they get an action. This might be taking two more gold, drawing two Tycoon cards, playing a Tycoon card, buying a new room tile, or bribing a character for six gold. Bribing a Citizen is a great way to steal them away from an opponent or force an Outlaw onto someone who’s doing a little too well to help slow them down. This is also a great way to score an Open or Secret Claim card.

There are a lot of moving parts in Saloon Tycoon. Citizens and Outlaws moving around, planning where your gold will end up, hoping that an opponent won’t build a room you need, and worrying about how many turns are left are always present in the game. Despite these different factors, the game is easy to learn and usually moves quickly. Sometimes there is a bit of a debate of which room tile would be best, but overall the options are clear. That isn’t to say that the game plays itself. Watching what other players are after and trying to upset their plans is a big part of this game. Getting the right Tycoon card can make things easier, but having something taken away from you at the wrong time can throw a major wrench into things.

Saloon Tycoon combines planning and goals with three-dimensional buildings and a lot of Wild West theme. It’s easy to learn and with so many cards in the decks, many of them unique, no two games will be the same. The theme is fun and the game will catch the attention of anyone passing by. I really have enjoyed every aspect of this game and look forward to seeing the finished product.