A Year Of Gaming – Setting Up and First Plays

I want to talk more about gaming, so here’s the first post of what I hope will be a useful series. A weekly post about games I’ve been playing, games I’ve picked up, games I’m going to be teaching, and whatever else I can think of! 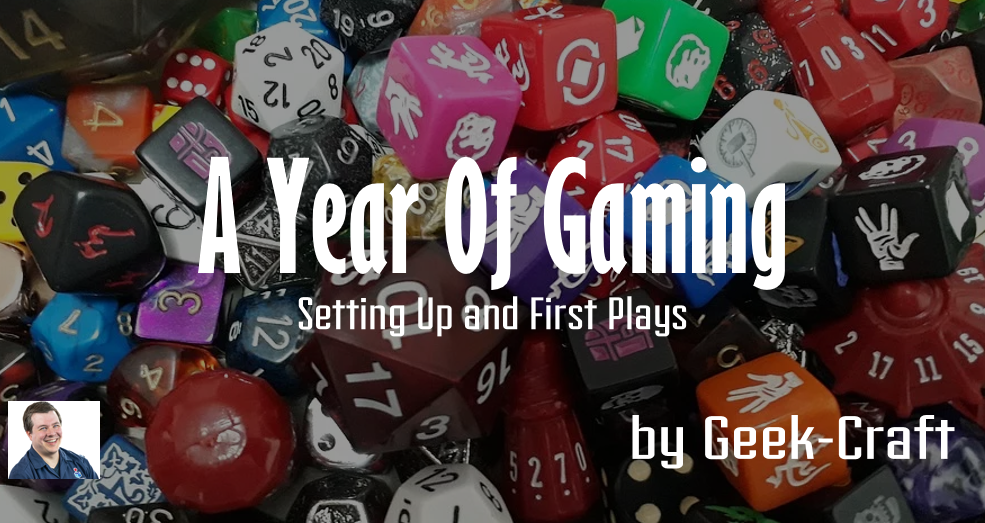 It’s hard to keep up a blog when life keeps throwing punches and curveballs. More hospital visits, depression, all things that are tons of fun. But I want to do better. I want to write more, and have it be more natural. I still want to do reviews and all that, but some more casual writings I think would be a good thing for me.

I’ve played The Crew another 18 times. It’s a cooperative trick-taking game from Germany that I have really been enjoying. I introduced it to some friends while visiting to help them move. I also started another campaign with my friend Alex. I’m still loving this game and am excited to get past the 10th mission to see some of the more difficult challenges. I also introduced the friends I visited to Medium where we had some… interesting answers. One of those friends, Scott, can be a force of chaos. This can be frustrating in some games, but worked decently well in Medium. I also played Qwixx: Connected, though only the one new kind of board with the extra boxes. I like it a lot – it’s a little bit of new with mostly the same rules, a great way to expand on this roll and write.

I also want to talk about games I’ve picked up and what drew me to them.

Though I’ve only played Food Chain Magnate once, I really enjoyed the way it worked. I’m excited to play it more and since Splotter titles have a way of disappearing for extended periods of time, when I saw The Ketchup Mechanism & Other Ideas for sale, I had to grab it. I’ve heard from those who know Food Chain Magnate that it’s a really nice addition to the game as well.

I got a gift card from a friend for Christmas to a local game store. I saw Caverna: Cave vs Cave — Era II and thought, “You know what I’ll love to type? A colon, an em dash and a roman numeral all in one game title!” In actuality, I really like Caverna: Cave vs Cave and think adding more to that game will be a good thing. More buildings, more resources, and hope that the next expansion (cause we all know that there’s more coming) just keeps making it better.

Finally, demo plans for the near future are on the calendar. I’ll be teaching Cities: Skylines at Immortals Inc. on January 12th. I’ll also be demoing it at Critical Hit Games on January 16th and 21st. I’ll also be demoing Tiny Epic Tactics at Critical Hit Games on February 1st. You can also RSVP for these events on Facebook or let me know you’re coming on my Discord.