Another week of gaming, acquisitions, and events. This time with some weighty packages and some heavier games, but also some light games and goofy fun. 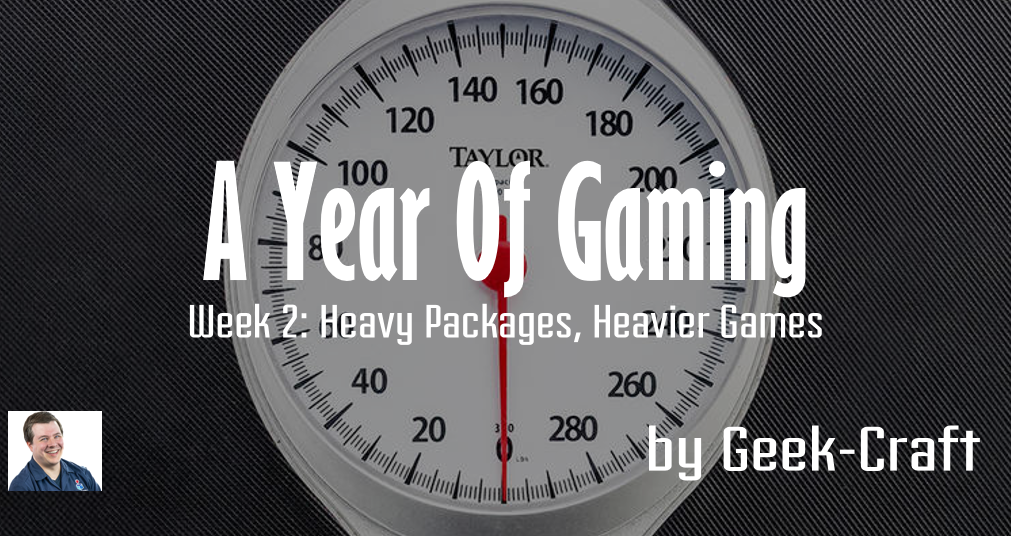 This article references the time between January 5th and January 12th, 2020.

Every Monday night I take games to Immortals Inc., a game store in Rocky River, OH. This time I took some oddball games to see what folks thought of them.

First on the table was ROLL for Your Life, Candyman. Real-time dice rolling games are fine, and the way this one worked was cute, but ultimately it’s not going to be a game I play a lot. It’s not bad, I’m just not a huge fan of most real-time games.

Dungeon Mayhem is a simple take that card game based on the DnD archetypes. It’s not a bad game, but it really works better if you know the decks for the different characters. It would also be nice if they would do a better job proofreading and playtesting their games. One of the characters in the expansion is a Shapeshifter, but the rules don’t clearly lay out what happens if you play a card and haven’t shifted shapes. It also doesn’t cover what happens if another player tries to transform by stealing a card. I know that it’s a fast and loose game, but it’s not hard to lay those things out. The other character in the expansion is one I recognized. I’m not an RPG player really at all, but even I know about Minsc and Boo. It’s a shame that his inferior clone makes an appearance in this game.

Next up was Why First?, a personal favorite. It’s such a simple idea, but the execution is very well done. Everyone plays a card to anyone at the table, including themselves, and that player moves forward or backward that many spaces. If they get multiple cards, they move the total sum of the cards. The last card of the round has to be played on yourself. Whoever ends up in second place wins. This twist makes the game shine and really makes the players think.

I think Irish Gauge is my first train game with stock options. I really enjoyed it, even if it’s not the prettiest game. I do wish there was a list on the board of actions a player can take. Just a little more reference and guidance would be nice. That being said, this game can vary wildly if a player doesn’t do what you’re expecting them to, or what is best for themselves. It’s not inherently a bad thing, but just know that a player choosing to do something sub-optimally can really impact other players.

The Crew hit table even more. I’m enjoying the more difficult missions and want to see just how hard they can really get.

As a last hurrah, we visited our friends, Scott and Lisa, who are moving away. We each picked a game we wanted to play, a personal favorite. Power Grid was my choice, and it was a decently close game. New players often get a little behind, but they did quite well. The Recharged edition rule changes made the game play a bit differently for everyone, and I’m not sure I like them more than the original, but I don’t hate them either.

Ticket to Ride: Marklin is what my wife picked, and it’s a solid version of the classic formula. There was some dickery by Scott again, but it was a decent game overall. I forgot how much I enjoy the series.

Rhino Hero is a great filler game and we played it before we had lunch. It’s one of those games that even if you lose like I did, it’s still a fun time and takes all of a few minutes to play.

I finally played a full length, full rules game of Food Chain Magnate. It did not disappoint. There are a lot of things going on, but it’s really not that difficult to figure out once it starts moving. Managing the other players and properly figuring out what they’re planning will help you do very well in this game. I can’t wait to try the full game again and then start adding in goodies from the expansion.

I also got my copy of Tiny Epic Tactics in the mail to prepare for the demo event at my FLGS. I’m excited to play it as I really enjoy other tactics games that I’ve played, but I also know most of those were video games and an analog game might feel different. I also got the Maps expansion which means more replayability.

The other title I picked up is the Second Sight expansion for Medium. I’m still surprised at how much I enjoy playing this party game, but it’s quite entertaining with most groups and will continue to hit the table in the future.

No new events to mention, just the same ones as the last post. Cities: Skylines at Critical Hit Games on January 16th and 21st and then Tiny Epic Tactics on February 1st. There’s also open gaming at Immortals Inc. every Monday from 5-9. If you’re looking to check a game out and want to meet up at any game stores in the Cleveland, OH area, let me know.