A Year Of Gaming – Week 24: Cacti, Clowns, and Cobblestone

Some new games this week, both played and acquired. Don’t worry, no actual pictures of clowns are in this post. 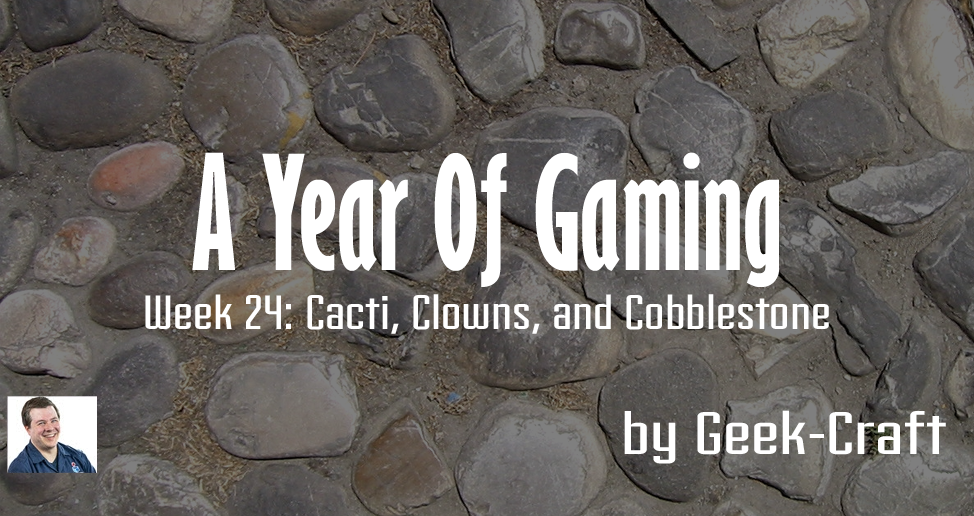 This article references the time between June 8th and June 14th, 2020.

I played Dollars to Donuts again and enjoyed it just as much as the first time. I used a slightly different strategy, my wife used a very different one, and we enjoyed ourselves. I also sat down on Tabletopia last night and played Succulent from Renegade Game Studios. Overall, this wasn’t a bad game, but it didn’t catch me like I hoped it would. Maybe part of that is the digital aspect instead of physical, or that a one hour game took almost two hours, but it just kind of fell flat for me. I wanted to like it – my wife loves succulents – but sometimes it doesn’t work out.

I had my Kickstarter pledge for Hostage Negotiator: Career arrive. There is a ton of new content, not to mention the campaign aspect and the red lens technology. I’m excited that there’s more content for this amazing solo game. Van Ryder Games makes solid games, but the solo work they do is some of the best in the hobby.

I also received Unmatched: Cobble & Fog from Restoration Games. It’s a new set that my good friend Chris Leder helped design. I love the mini for the invisible man and the new characters look interesting. I am looking forward to trying it.

I got my 3D printer back up and running and finished the storage solution for Root. It’s gorgeous. The pieces all fit super well, the organization is top notch, and it just makes me want to play it even more. You can check out the files on Thingiverse. Of course, now I want to 3D print all the things for all the games… Shock, I know.