A Year Of Gaming – Week 25: Great Scott! Read This, Would You Kindly? 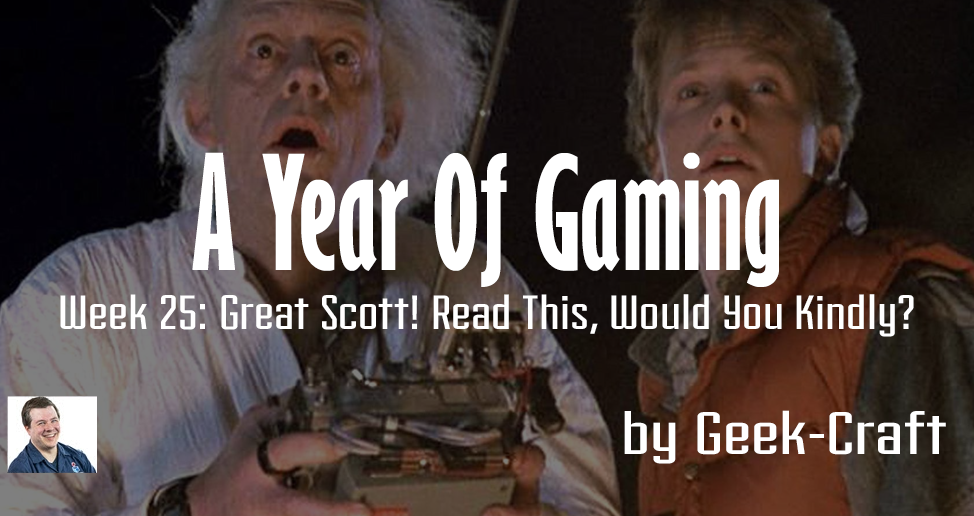 This article references the time between June 15th and June 21st, 2020.

I also played Shelfie Stacker on Tabletopia and really enjoyed the solo game. It’s got a lot of gamer humor and I think it will resonate with gamers who want a light dice drafting game that pokes a little fun at the hobby. That being said, there are a lot of references that may go over some heads, so be ready to explain what is going on if you try it.

I got Back to the Future: Dice Through Time sent to me by Chris Leder. Chris is a long time friend, even if he won’t admit it, and I think he’s a great game designer. If you’re curious about this game, it’s a Target exclusive

I also got a big box from Pandasaurus Games. Inside were three games. Godspeed, The Mind Extreme, and Sonora. I think Godspeed looks gorgeous and I love the slightly odd theme of the space race being a lie, not in that we didn’t go, but that we’ve done so much more. The Mind Extreme doesn’t really catch me, but after all of the talk when it first came out, I think it’s worth giving it a shot. Of the three, I’m most excited to try Sonora. A flick and write game is a very interesting concept, even if I’m terrible at flicking games. I am hoping to get at least one of these to the table this week.

I picked up the Bioshock collection for my Nintendo Switch and despite the original game coming out in 2007, the story and everything still holds up. I’m loving exploring Rapture on my Switch and am excited to go back through Bioshock 2 and Bioshock Infinite as well. There have been a few bugs and one crash that cost me about an hour of play, which is frustrating, but I’m still enjoying the experience.