Math Trades are intimidating to anyone who hasn’t done one before. There’s a ton of games to look at, many things to consider, and so much information that people can get overwhelmed very easily. As someone who’s done a number of Math Trades in the past, I’m here to help make things a bit clearer.

Math Trades are something done often on BoardGameGeek and there is usually a Math Trade at the larger game conventions, like Origins and Gen Con. But first, let’s talk about what a Math Trade really is at its core.

Essentially, you trade games you’re willing to give up to get games you want. There’s a lot of background stuff going on, but the core idea is you’re getting rid of a game that you’re not enjoying to get a game you feel you’ll enjoy more, and that’s the same for everyone. To really get Math Trades, there are a few core concepts you have to understand.

Circular trading is like a regular trade, but instead of me giving you a game and you giving me a game, we involve some other folks. Let’s come up with an example: 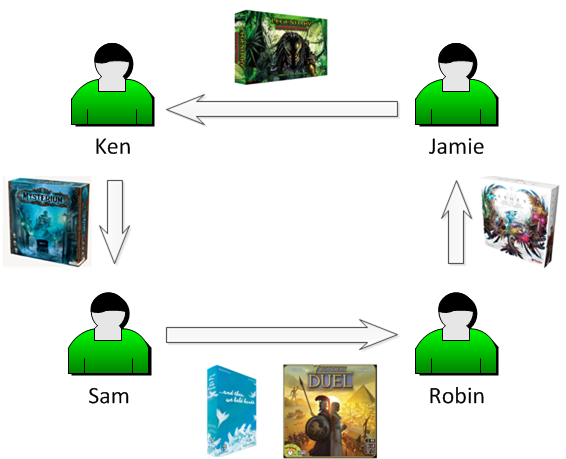 In this example, there are four participants. Ken is giving Mysterium to Sam. Sam is giving …and then we held hands and 7 Wonders Duel to Robin. Robin is giving Ashes to Jamie. Jamie is giving Legendary Encounters: Predator to Ken. Each person is giving up one game to get a different game. This is great when you have a game for trade, but someone who wants your game doesn’t have anything you’d like in return.

I’m not sure what this is commonly known as, but it’s a slightly strange concept to some. We’re going to use a non-board game example (I know, how strange) but it’ll work a bit better. I give you $10 and ask you to go to the grocery store and get me $10 worth of fruit. I don’t care what kinds, just that I want $10 worth. That could be all apples, or half apples and half oranges, or whatever other ideas you can come up with. This is a value trade – you’re being given $10 and you’re giving me $10 worth of something.

Let’s say you’re a bit of a prankster in the fruit example. You could, technically, get $10 worth of tomatoes. That fits the definition of $10 worth of fruit, but is likely not what I intended. So a Conditional Value Trade is where I give specifics around what I want to get. For example, I could specify that I want a combination of apples, oranges, and bananas. In this way I have some control over what I’m getting, but not absolute control. It also means that if the store is out of something, the other options are still valid.

Now to combine the two. Let’s take the example above. This trade could have started with everyone going “I want a new $40-50 game but I don’t want this old game anymore.” Each of the participants said they would be willing to pass along a game (or set of games) that totaled around that value. In Sam’s case, that meant combining two games together. This is kind of a math trade, but we have a few extra things to add for a full-fledged experience.

There are three phases to each Math Trade: Item addition, Wish list submission, and The Exchange.

For Item addition, everyone who is involved in the Math Trade posts to a single Geeklist on BoardGameGeek the items they’re willing to give up in the trade. Condition notes, extras known as sweeteners, and version info can be included. There is a cut-off date for this, and up to that point, anyone can add items to the list that follow the rules.

During Wish list submission, users go through the Online Want List Generator (OLWLG) and select which games they’re interested in receiving. You can add as many or as few items as you’d like, even none if there aren’t any games you want.

A highly recommended next step is to assign value to each of the items you are offering and to each of the items you’d like to receive. This is usually just a dollar value, but you can use whatever system you want. This information is tied to your account and is not public, so if you don’t think your games are worth as much as someone else, they won’t find out.

Now comes the intimidating part. You get a two-dimensional array of boxes. Think of it like a giant Battleship grid. Every intersection is the cross-coordinates of a game you’ve added and a game you’re wanting. You check the box if you’re willing to make that trade and leave it empty if you are not. The value assignment in the previous step is useful here for a few reasons. First, the OLWLG sorts the items by price, so you can easily read through the items and not worry that you’re trading away your $100 game for a copy of Uno. The other recent addition is an auto-check feature. This is a blessing to people like me who add lots of items. If you activate it, it checks every item where the value of the item you’re trading away is less than or equal to the value of the item you would be getting.

I’ll admit, this can be a little daunting and confusing, so let me show you an example chart. I made it in Excel, but it should get the point across. 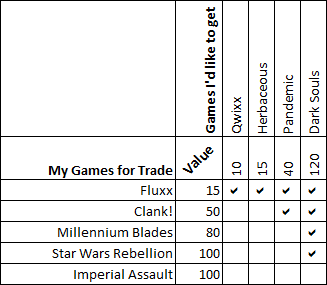 Instead of looking at this as a full chart, let’s look at it row by row.

Now, for any given item, only one person can get it, but if there were two copies of Pandemic, I could use Duplicate Protection, something built into the OLWLG, to make sure I only got one of them via trade. I haven’t marked anything for the Imperial Assault row, so I will not trade it. This is very important and helps reduce a lot of concerns – if you submit an empty list for every item, you won’t trade anything. This is fine and allows you to not participate in the trade if you don’t find anything you want.

After the Wish list submission has closed, the person in charge of the event will run the tool and it will notify each person who they are trading with and what they are trading. This list can look a little confusing, but it’s simply a list of “Things I’m getting” and “Things I’m giving.”

Finally at the Exchange, there are a few things to bring. The games to trade, obviously, as well as your trade lists and a sign with your name and avatar on it. Prepare to walk around a crowd of people who are all looking for someone. You’ll hear a lot of name yelling, which gets amusing when it’s for someone named “Sasquatch” or some seemingly random grouping of numbers. For some Math Trades, there isn’t a meet up and instead participants mail their games to the next person. There’s obviously a higher cost associated with that, but compared to the cost of a convention, it’s not a terrible idea.

So that’s it. There’s a lot to it, but hopefully this helps you better understand how a Math Trade works and why it can be worth the time and energy. You likely won’t trade everything you put into a trade, but you can usually count on at least a couple of items trading. If you have any questions, leave comments below or reach out to me on social media.