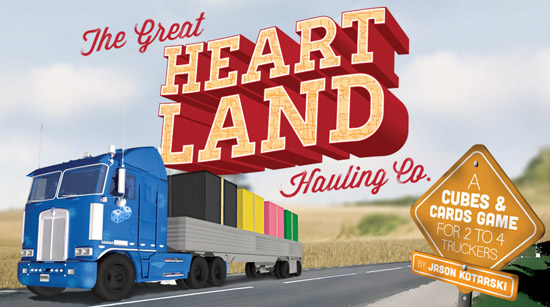 While at the World Boardgaming Championships, I got to try out Dice Hate Me Games’ newest Kickstarter project, The Great Heartland Hauling Co. by Jason Kotarski. I really like pick up and deliver games, and thought that one that plays in 30 minutes would work well and be a great fit with my gaming group.

When I saw the announcement on Twitter, I was certainly intrigued. A seemingly simple card game that would be easy to learn and quick to play, but still feel like a full game played is a difficult balance. I got to actually sit down and try the game at WBC.

Rather, I got to sit down and learn the game from the rules. Chris from Dice Hate Me had to run out for a few minutes, but I was very anxious to get to try the game. He asked me to sit down and read the rules, both making sure that they make sense and checking that others can learn the game without Chris’ direction. My girlfriend Sam joined me, as did two other attendees of the convention.

With only eight pages, with one of them being the cover, I figured it would be very easy to learn. I read the rules to the other players, and while the one player kept interrupting with questions about topics we hadn’t covered, the rules went down quickly and smoothly. I’ll summarize them here, but you can see the full rules on the Kickstarter site.

At the beginning of the game, you lay out the city cards as described for your number of players. In our four player game, we did the cross formation below. 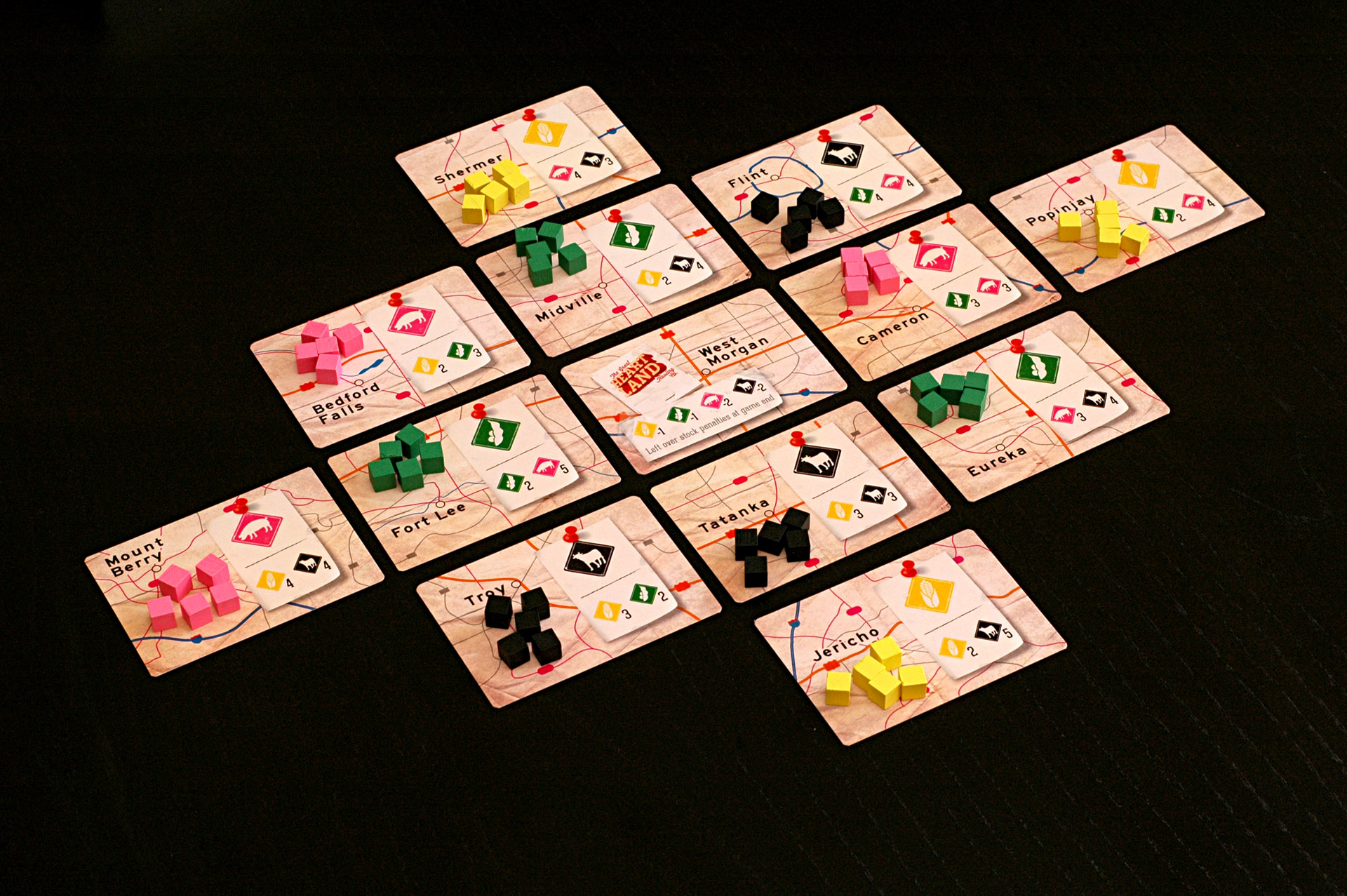 Each location has a large sign, indicating the cubes that should start on that location, as well as two smaller signs with numbers, indicating what goods can be delivered there and how many points each delivered good is worth. Each player got a hand of five cards and we started. Below is a picture with all seven kinds of cards in the game. 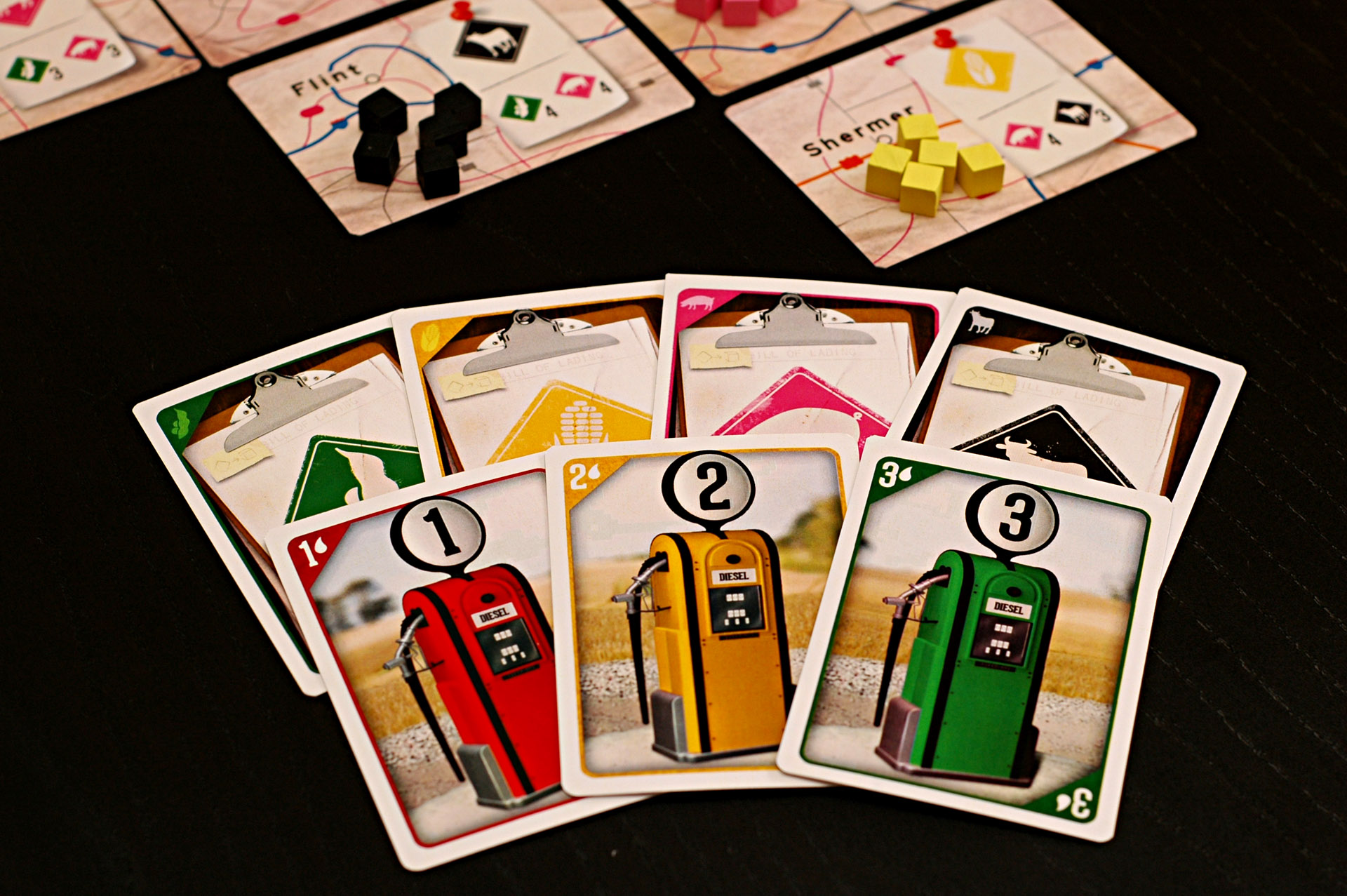 On each turn, the player must move one to three spaces. This can be done either through gas cards or through using points. If a player wants to move to a town two spaces away, this can be done through two 1 value gas cards, a 2 value gas card, or by giving up 2 points. When you use a gas card, you must use all of the movement, so the 3 in this case wouldn’t work. You also can’t use a combination of gas cards and points to move. This creates an interesting need for not only gas cards, but the right gas cards.

Once at a destination, a player can either pickup goods, deliver goods, or “refuel” and get a new hand of cards. Each of these actions are very simple.

For picking up or delivering goods, you play the appropriate good card from your hand. Want to pick up a cow from Troy? Just play one cow card. Want three cows from Flint? Play three cow cards. However, there are things to watch out for. First, there are only eight spots on your truck for goods. Load up too much and you’ll need to start delivering. Also, there are a limited number of cards in the deck. If the other players are collecting the cards you’re after, it may be difficult to get rid of the cargo you’re hauling.

When you deliver a good, it stays in that city. For example, someone has delivered two corn and two beans to Troy. You can pick up these secondary goods, but at a rate of two cards per cube. This can make it difficult, but sometimes the extra card is worth it to get a good that is tied up with the other players. 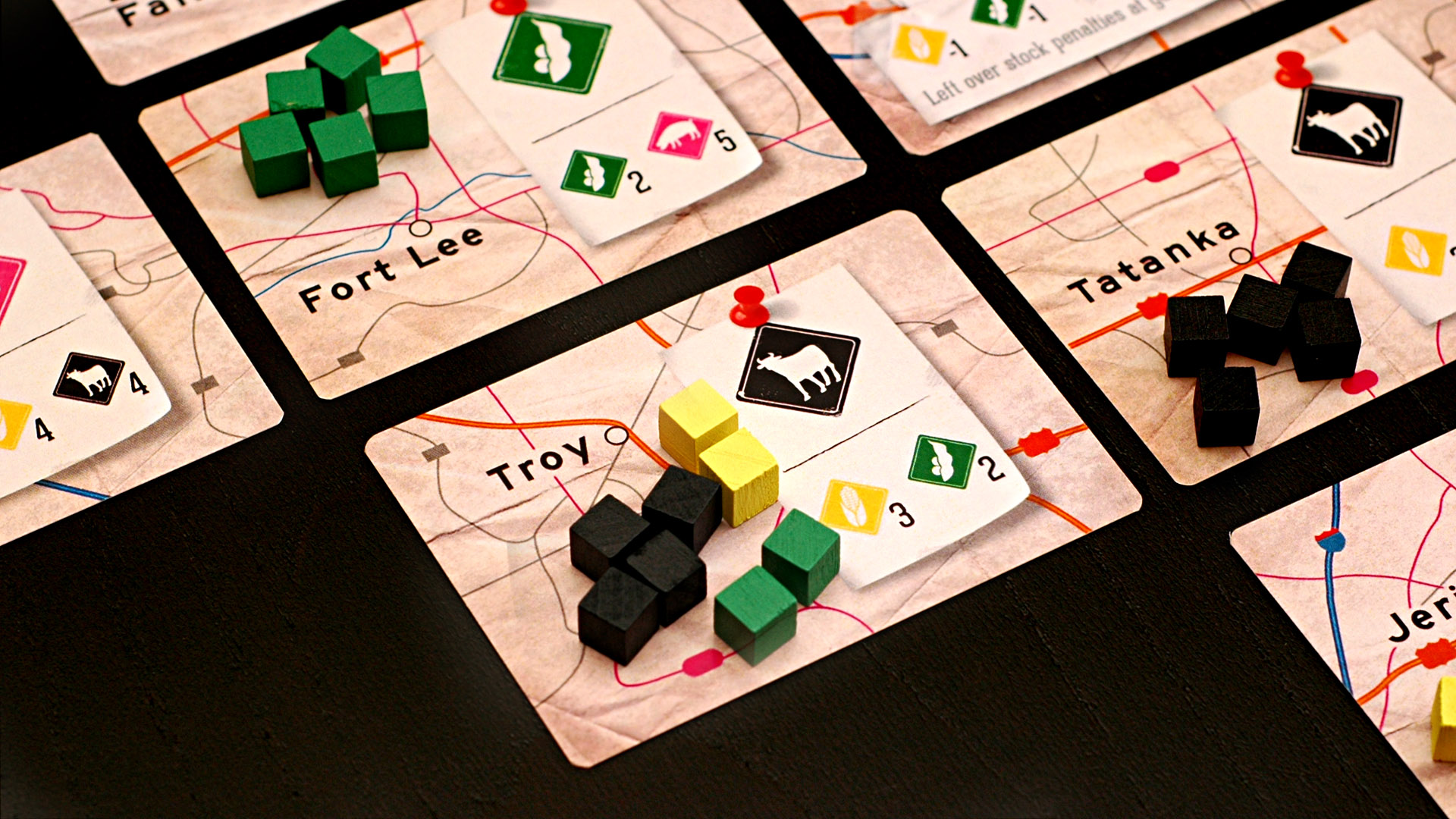 Troy with three kinds of goods

Over the course of the game, goods will be repositioned to other cities. This creates a dynamic flow that is purely based on the way that the players are playing. The dynamic game play will change each game, based on the players, the randomized city lay out, and the way the cards are falling.

The refuel action is where the player pays one point and can discard any number of cards from hand. This can be crucial midgame when a player desperately needs to get a gas card or is hoping for one last pig card.

The game ends when a player reaches 30 points, or 50 points in a 2 player game. Once this happens, all other players get one last turn to deliver goods and the game is done. Players deduct points based on cargo still left in their trucks and the person with the most points wins.

After our four player game, I was really surprised. The balance between a quick game and feeling like a game was actually played is difficult, and the designer did a great job of getting the balance right for this game. I borrowed the game later for a two player game with just Sam and myself, and I had a really hard time returning the prototype to Chris. I wanted to take the game home just so I could play it more.

The game is $25 on Kickstarter, and having only played the base game, I’d pay that for the game. It will also come with an advanced variant with terrain costs and other extra rules, and there will be some stretch goals for the game. If you think the game looks good, check it out on the Dice Hate Me Games site, give the game a thumb on BoardGameGeek, and if you like it enough, back it on Kickstarter.