The folks over at Ares Games are known for Wings of Glory, but they put up a new Kickstarter project for Galaxy Defenders. The game is a cooperative tactical, scenario based board game for one to five players. They contacted me to do a preview before the project ends. 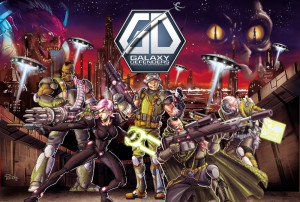 When I got the prototype in the mail, I was very impressed. The production quality of the prototype was very well done. The rule book is extensive, the cards are easy to understand, and the sample mini included is very heavy and well made.

The basics of each turn are simple. Each unique hero can perform three phases: Combat, Movement, and Action. During Combat you get to shoot at the incoming alien forces. The Movement Phase is when your character moves around the board. Actions are used for other things during the turn, like unjamming a weapon or searching for more ammo. Some scenarios also include actions specific to that mission. Each hero has their own default equipment, starting health, and movement speeds.

After each player does their set of phases, the aliens get a chance to move around and deal damage to the heroes. The alien turns are controlled by a special deck that declare which aliens will be active that turn. Each alien is represented in another deck that determines the health, armor, and what it does when activated. Each alien acts based on where the nearest hero is located. Once each hero has performed their hero and alien phases, the top card of the event deck is played which can add more aliens to the board and affect the heroes in other ways, like reducing movement or causing damage, as well as benefits such as providing ammo or healing the heroes.

Unfortunately, the rules were a bit much to take down at first, but most of the games I play do not have a highly detailed 43 page rulebook. The initial setup is a bit intense. However, once you understand it, the game has a lot of strategy that doesn’t weigh down the enjoyment of playing. Every turn is filled with tension for the players. Taking out aliens is very important, but the weapons can become jammed or run out of ammo. The game shares some similarities to other tactical combat games, like Mansions of Madness or Doom. However, this game has much more to it and does not require a player to be the bad guy. I really enjoyed the game and look forward to getting a chance to play it with a larger group.

If you enjoy tactical skirmish games, you should really check it out on Kickstarter now. They have less than two days before the project ends.

A preview prototype copy of the game was provided for me to play and review.