What Does The Fox Think? – A Preview Of Cascadia

Flatout Games has a second game coming to Kickstarter today and they sent along a prototype copy to check out. As I can bearly figure out another good pun, let’s get to the review! 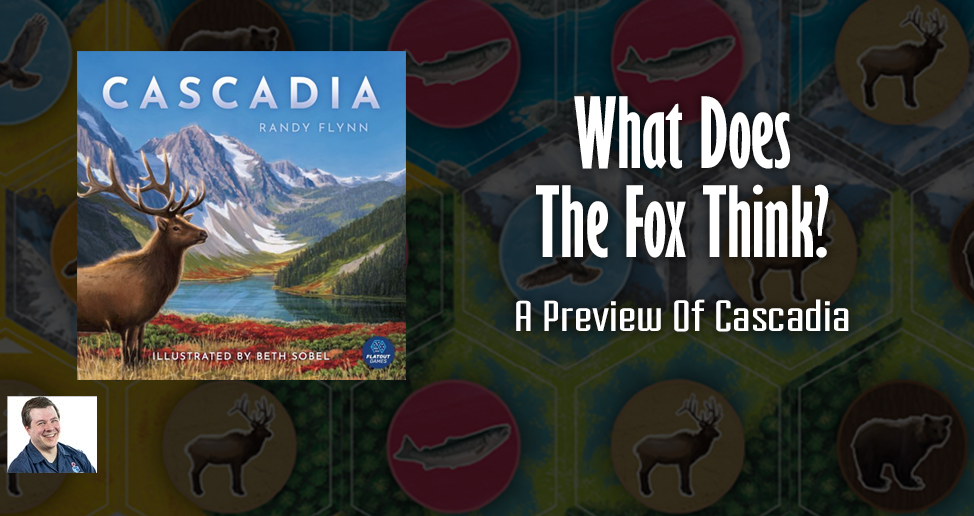 Flatout Games is a company that’s done a lot of things, but they’re kind of all over the place (in a good way). They published Calico, an adorable light weight game about quilting and cats. They also designed Point Salad and Dollars to Donuts, both games I’ve enjoyed. The three members of the group seem to enjoy games that are a little thinky without being overwhelming, have an element of spacial patterns, and are the kind of games that are great to reset and immediately play again.

Cascadia (named for the region on the west coast of North America) is another game that fits in their brand quite well. In the game, each player is building a grouping of hexagon tiles that have one or two environments and one or three animals that can live there. In the game there are five animals and five environments, though they don’t match up one to one. Each hexagon land tile has one or two environments; forests, rivers, wetlands, mountains, and prairies. The five different animal types are hawks, bears, elk, salmon, and foxes. 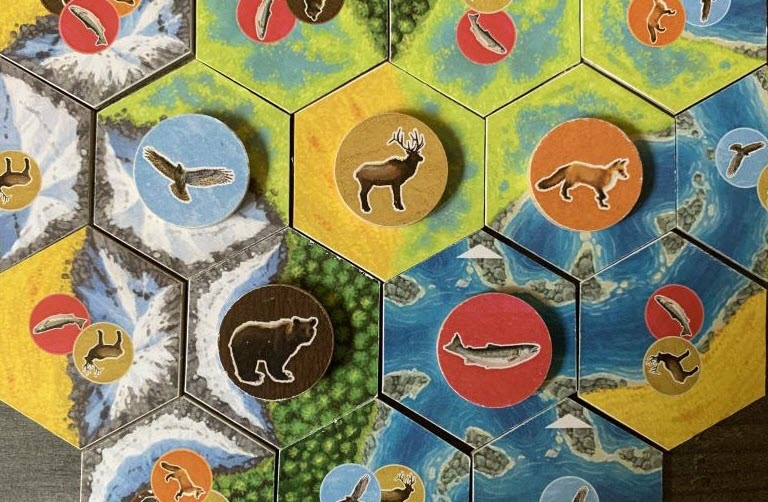 Each animal scores differently and the game comes with three different scoring cards for each animal. These can be changed out each game to affect the scoring, though each animal sticks to a general idea for scoring. For example, the bears all score based on having a small number of them in  groups. The A card scores for each pair of bears, the B card for groups of one, two, or three bears, and the C card scores for each group of three bears. Even though these are very similar, they still impact how to best play and plan out the bears you add to your play area.

At the beginning of the game, each player receives a starter land tile that has each environment represented and a spot for each animal type. On a turn, players will select one of four pairings available. Each pairing has one animal and one environment tile. These are added to the player’s space wherever the they want, but there are going to be better and worse spots for scoring. The animal is then added to a hexagon of the players choosing, so long as it can support it. The player can also choose to discard the animal.

When an animal is added to a hex with only one environment and animal type, a keystone tile, the player earns a nature token. These are worth a point each at the end of the game, but also allows the player to “cheat” and take any animal and any land tile by discarding it.

Over the course of the game, there is very little player interaction, which I think works for this game. The game has a good mix of puzzle and optimization focus. Given a set of pairings throughout a full game, the score can be optimized. This is why the four pairings are important – it forces each player to pick what makes sense at the time and can add an element of making the most of what you have access to. It also leads to the main point of player interaction – being frustrated when someone takes the fox you were hoping to pick up on your next turn.

At the end of the game, players score points for each animal based on the wildlife scoring cards. Each terrain type also scores a player points, with a small bonus being awarded to each of the largest grouping of a given environment. Any unused nature tokens are worth a point each. These are all summed up and the high score wins.

I think the prototype components are a good quality, and based on Calico, I can only expect solid pieces in the final product. The rulebook is well written, with lots of pictures and examples to make an already simple game crystal clear. There is a solo mode, which I haven’t tried yet, and also a family and intermediate variant planned. This isn’t going to be a heavy game even at its most complex, but it’s going to be a great fit for families, casual gamers, and folks who are curious about the hobby.

If I had to find a weak point, I would say the theme is where the game isn’t the strongest. The game feels like an abstract game at its heart, and this isn’t a bad thing. I didn’t know that the region was called Cascadia, I’m far from an outdoorsy type of person, but this game doesn’t require any knowledge of any of that. It’s simple, elegant, and works very well. The art is gorgeous, though anything by Beth Sobel is going to be, and while the game uses the art nicely on the cards, the hexes and animal tokens are a little too small to be easily appreciated for the art. The icons and everything are clear, don’t get me wrong, but I would hang a poster of the cover art in my game room. 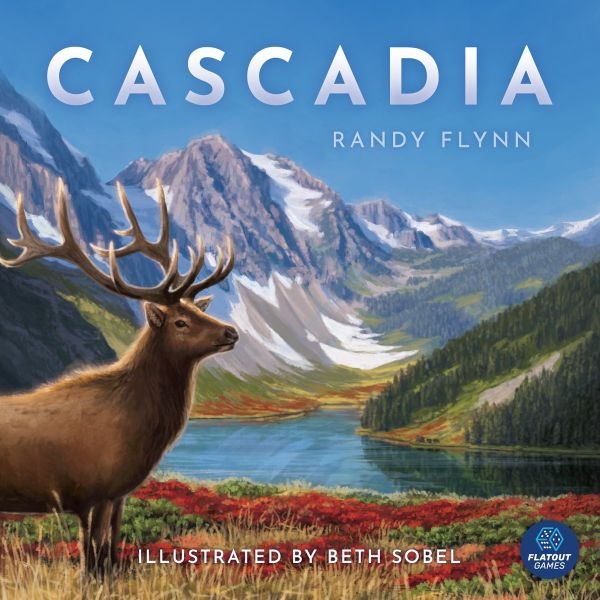 Flatout Games has set out to create another light, thinky, puzzly game and I think they’ve hit the nail squarely on the head. This is a simple game that is a bit more than filler complexity, moves quickly with some opportunities for a little brain burn, and is solidly a game I would suggest to folks who are looking for something to play with their families. If you’d like to see more about the game, check it out on Kickstarter now.