You’re a Hairy Wizard! – A Review of Harry Potter: Hogwarts Battle – Defence Against the Dark Arts

Harry Potter: Hogwarts Battle – Defence Against the Dark Arts is one of the longest game names in a while. Does the game play feel solid, or is it as long and drawn out as the title? 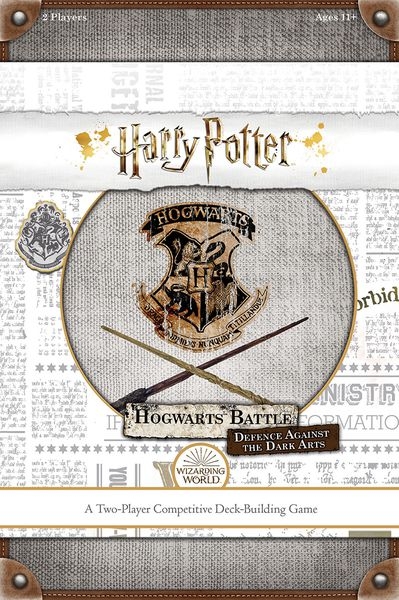 A few things off the bat. First, for simplicity sake, I’ll shorten the title from Harry Potter: Hogwarts Battle – Defence Against the Dark Arts to just DADA. That way I don’t use the name of the game three times and you have to scroll for an hour. Second, I’m not a Harry Potter fan. It’s a fine series, but when the books come out and you’re 11 and you have a certain hair cut and certain glasses and are a bit socially awkward… Well, kids can be cruel. Let’s just leave it at that. Finally, I was given a copy of this at Origins by the game’s publisher, The OP (pronounced like the first syllable in operation).

DADA is a two player only competitive deck building game. At its core, it has many similarities to Harry Potter: Hogwarts Battle, which makes sense. In this game, you are students who are training to duel. The game pits two players against each other in a battle to see who can out magic the other.

At the beginning of the game, each player starts with a 10 card deck. These decks have nine cards in common, but each player selects a familiar that will help tailor their game play to their style. The three options are a cat, toad, or owl; all fitting for the Harry Potter universe. Players will also select their Hogwarts houses, but this does not impact the game play at this stage. Players will draw a hand of five cards and use the spells to force their opponent back, heal themselves, and gain money to purchase other cards. The cards that make up the market in this game are one large stack. In this deck you can find allies, items, and spells all with images from the movies.

As the players duel, eventually one of them will be stunned by going too far back on the practice mat. When this happens, they receive a stun token and the game mostly resets. All cards that a player has gotten are returned to their decks, including allies and discarded cards, and positions are reset on the practice mat. In this way, if your opponent gets particularly lucky, you can still come back and win the next match. The game is played best of five, but each full match usually takes less than 10 minutes.

The main differences between Hogwarts Battle and DADA is the design of the game play. It’s a very similar deck building system, but Hogwarts Battle is cooperative, for 2-4 players, and can take over an hour to play. DADA is competitive, only 2 player, and can be played in 20 minutes or less. If you enjoy one, you should likely try the other, but there have been a number of changes to the system.

One of the improvements over the original game is the way that your house impacts your spells. All spells and items in the game are playable by either player, regardless of house. However, if you belong to the house pictured on the card or you have an Ally in play that belongs to that house, you also get the extra effect at the bottom of the card. This small change impacts gameplay significantly. Even if I don’t have anyone from Gryffindor in your deck, it may be worth it to get the spell or item to block your opponent from getting it and using the extra ability. You can also get spells that give your opponent Hexes, which are cards that make their turns more difficult. For example, increasing the cost to purchase cards or limiting how much damage they can do on a turn.

There is enough strategy in DADA that the game doesn’t play itself, such as figuring out card combos and good spells to get for yourself or deny your opponent. However, I’ve noticed a trend that whichever player wins the first match has gone on to win the game. Now, this isn’t a 100% of the time thing, but it’s something to note. Another odd thing I’ve found is that of the 129 cards in the market deck, only 14 give Hexes out. I wouldn’t want the game overrun with Hexes, but I’ve gone full games without seeing any mention of them. I wish there was an alternate way to get them that didn’t involve spells – maybe purchasing them for a large amount of money instead? At the same time, if they do come out in full force, it basically kills the game. If each Hex had a way to get rid of it, I think that could be interesting. Not saying that I know better than the designers, just saying what I think could work.

Despite not being a fan of the theme, the game play is solid. It’s nothing revolutionary, but it’s fun to play and feels similar to Ascension or Star Realms with the houses acting as factions and Allies acting like constructs or bases. DADA adds being able to remove cards from your deck, something I feel the original is lacking. It also offers up a consistent card to let players get to more money. Books are always available and cost three. They give the player two money or remove themselves from the player’s deck and allow them to draw a card. This fixes an issue I’ve had with the Hogwarts Battle where there’s no guaranteed way to be able to buy cards if they are all expensive.

While the game play is solid, there are some things that I feel are missing or were overlooked. First, while the rulebook explains the game well, it doesn’t cover some edge cases. If there’s a card in my hand that I don’t want to play, do I discard it? Do I have to play it? If I am undamaged but I gain a health, I don’t go forward, but do cards that trigger when I heal go off? 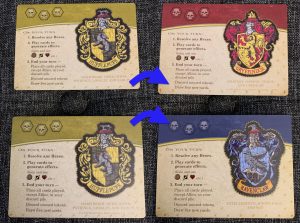 The house cards aren’t the same

The player house cards look great and cover how the turn works well, but there’s an odd design with them. There are two cards for each player, and each player selects their house independent of the other player. No problem there. However, one of the Hufflepuff cards has Ravenclaw on the back while the other has Gryffindor. It’s a silly thing, but it means you have to make sure each player gets the right combination of cards. 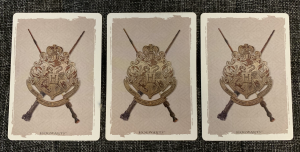 The linen cards are a nice upgrade from the original game, but the subtle color differences on the back of the starting deck cards are frustrating. 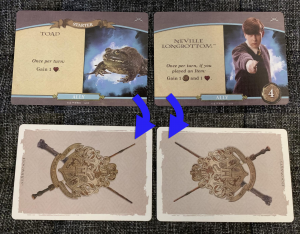 The cards aren’t the same direction

There’s also an issue with the starting allies where they are rotated 180° from the rest of the allies in the game. Also, how is Neville not in Gryffindor?

You could say I’m being nitpicky, and you’d be at least a little right, but when The OP has been around and making games for over twenty years, and I expect better consistency and attention to detail.

Is this game for you? If you’re a Harry Potter fan or enjoy casual deckbuilding games, it’s definitely worth a try. If you’re like me and will be bothered by some of the inconsistencies, I’d suggest getting sleeves for the game. Of course, Hogwarts sleeves would be awesome, but I can’t find anyone who makes them. If you’re a fan of the original cooperative deckbuilding game, but want something a little faster and competitive, this is a great fit. DADA isn’t perfect, but it improves on the core concept very well.